The Collective Archive III / Timeline
2017 | Untitled (Yellow)
2016 | < dienstag abend > No.84
2015 | The Collective Archive II
2014 | The Collective Archive I
2013 | The Fox Den
2013 | Uniforma
2013 | Untitled (Ver navios passar)
2012 | Al Wahda
2011 | Block TV
2010 | Trinomial
2010 | Guided Tour
+ | < dienstag abend >
+ | Gudrun Ingenthron
+ | Transatlantica
CURATORIAL
NEWS
CONTACT
BIO
Carnations and Velvet Timeline - Galerie Hlavního Města Prahy, Prague (2019 CZ)
Photo: GHMP
Photo March (video projection on found object)
The Timeline departs from a commission for the exhibition Carnations and Velvet - Art and Revolution in Portugal and Czechoslovakia, curated by Sandra Baborovska and Adelaide Ginga at the GHMP - Prague City Gallery.
My proposal for the 36 meter long exhibition room thematizes and explores the relations between home and institutional archives. I have worked with materials from my father’s private photo archive and gathered images and documents from other private sources: amateur photographs by Martin Preiss and Růžená Preissová, documenting respectively the Warsaw Pact Occupation in Prague in 1968 and the funeral of Jan Palach in 1969; and amateur photos and videos produced by the members of the Portuguese delegation of the Forum of Young Professionals visiting Prague during the protests of the Velvet Revolution in 1989. These were articulated with materials originating from institutional archives such as the archive of the Czech Television broadcast (ČT), the archive of the Portuguese Radio and Television (RTP), the Czech Press Agency (ČTK), the Foundation Mário Soares, the Vacláv Havel Foundation, the Czech and Portuguese National Libraries, the Lisbon Municipal Library and the Photography Archive of the Prague Municipal Gallery among others.
Additionally to the institutional and non-institutional archives, the Timeline includes a third source of documentation of and commentary upon the historical events: a selection of works of art by Czechoslovak and Portuguese artists by which a direct connection between the time and conditions of their production and important events from the presented chronology can be traced. The idea behind this triad is the non-hierarchical presentation of three distinct sources of documentary production in order to break up with the sovereignty of the institutional (and often authoritarian in their power of establishing a notion of truth attached to specific historical narratives in detriment of other) archives.
The materials presented in the Timeline include otherwise photographs, journal cuts, video (both video documents and digitalized film footage) and sound material, books, letters and other documents. The selection criteria of these materials obeys to the concept that, every time when possible, events occurring in one country should be presented through documents produced in the other one. By, for example, inserting the Occupation of Czechoslovakia in 1968 in the timeline through its reports in Portuguese printed media or the Portuguese Carnation Revolution through reportage by the Czechoslovak Television broadcaster, it is my intention to give access to a simultaneous account of information about the portrayed historical event itself as well as of the political and social context of the country in which the report is produced and diffused. In the specific above mentioned examples, the pursued meta layer of information gives access to a reflection upon how in Portugal the massive media coverage of international events in 1968-1969 contrasts with a general silence upon the national student protests and shows how the reports on the Portuguese Revolution were partially instrumentalized for the legitimation of the contemporary Czechoslovak Socialist political program through the inflation of the revolution’s communist potential and the allusion to links between this process and the Czechoslovak regime.
In terms of events, like the exhibition for which it was conceived, the Timeline unfolds around three main axes: 1968, with the Marcelist Spring in Portugal, the Prague Spring and its crushing in Czechoslovakia; 1974, with the Portuguese Carnation Revolution and 1989 with the Czechoslovak Velvet Revolution. In between these strongly transformative historical episodes, the Timeline portrays the different political regimes in both countries and addresses in many cases less known relations and cultural transfers between both. Such are the cases of the exile of several leaders of the Portuguese Communist Party in Prague, in the 1960’s, the post-Carnation Revolution allocation of grants for Portuguese Students to study in socialist Czechoslovakia, or the broadcast in Portugal of animated children's films produced in Czechoslovakia, curated by Vasco Granja, that reached a whole generation of viewers.
Finally, the main concept of the Timeline installation is (likewise the series of works I have produced for the current contemporary art nucleus of the exhibition) to entangle it with archive theory and to reveal a set of formal elements and symbols that reappear in both countries and are transversal to the different social and political transformation processes. These symbols are the tank, the V hand sign for victory and the flowers carnation/rose. The symbols appear attached to different historical moments and political processes, sometimes converging, sometimes conflicting in their meanings. Brief examples are contrast between the negative connotation of the thank connected to the 1968 occupation of Czechoslovakia and its positive connotation within the Carnation Revolution; the red carnation generally perceived in a negative way in contemporary Czech Republic, as a symbol connected to the Socialist Government of Czechoslovakia and the Soviet Union, or the hand sign of V for Victory used in the logos of the Movement of Armed Forces in Portugal (MFA) and of the Civic Forum (OF) in Czechoslovakia. 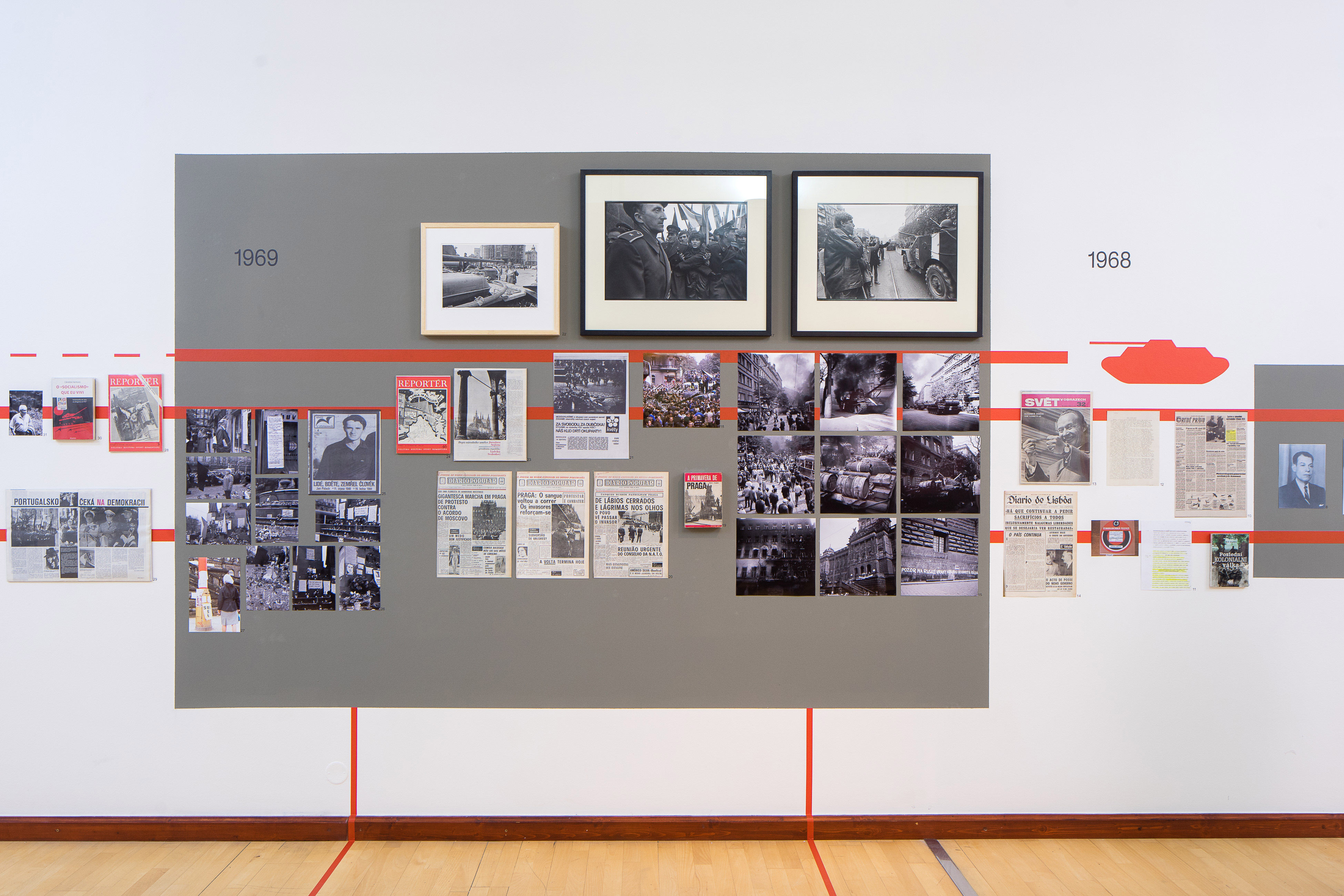 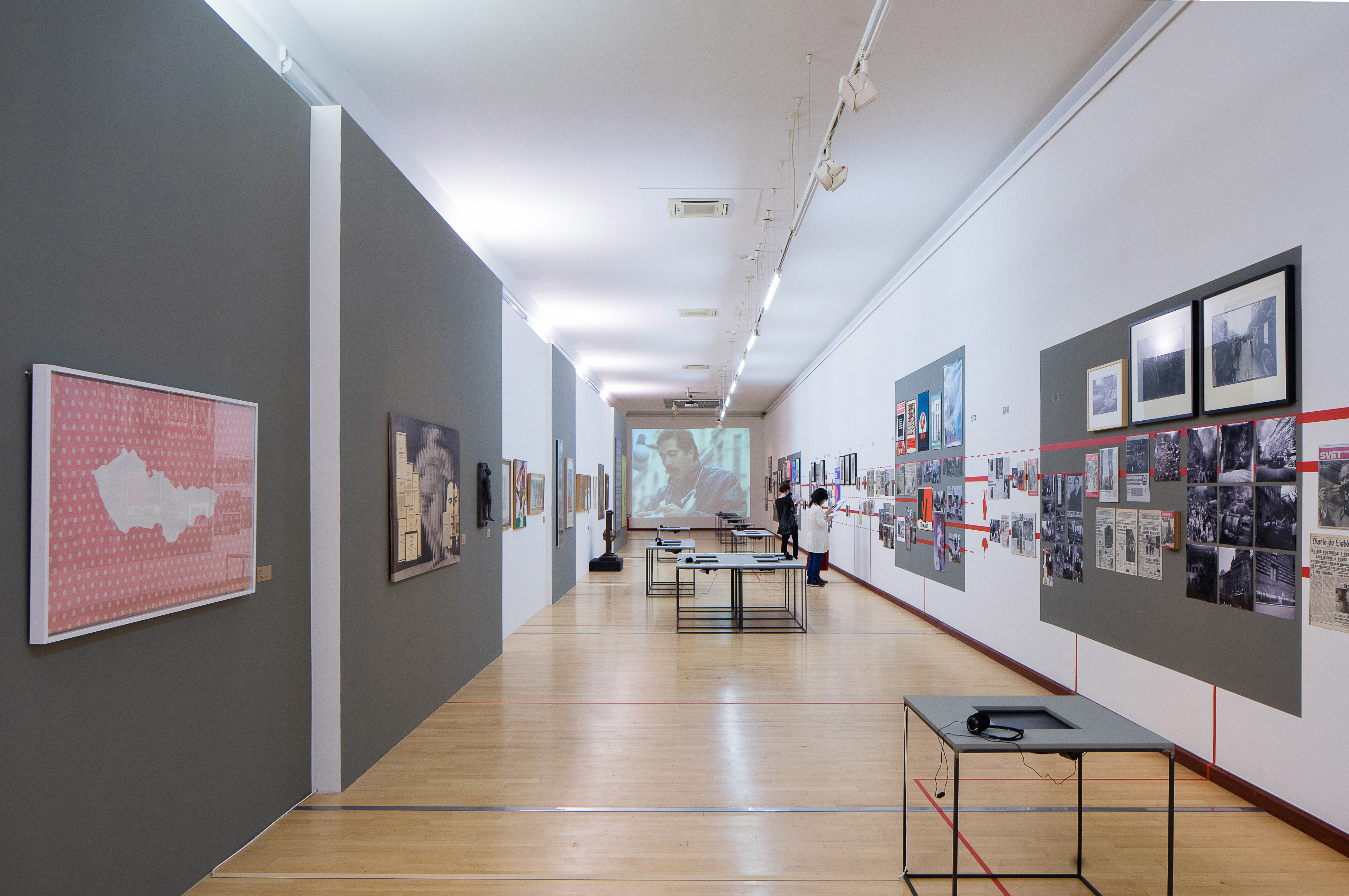 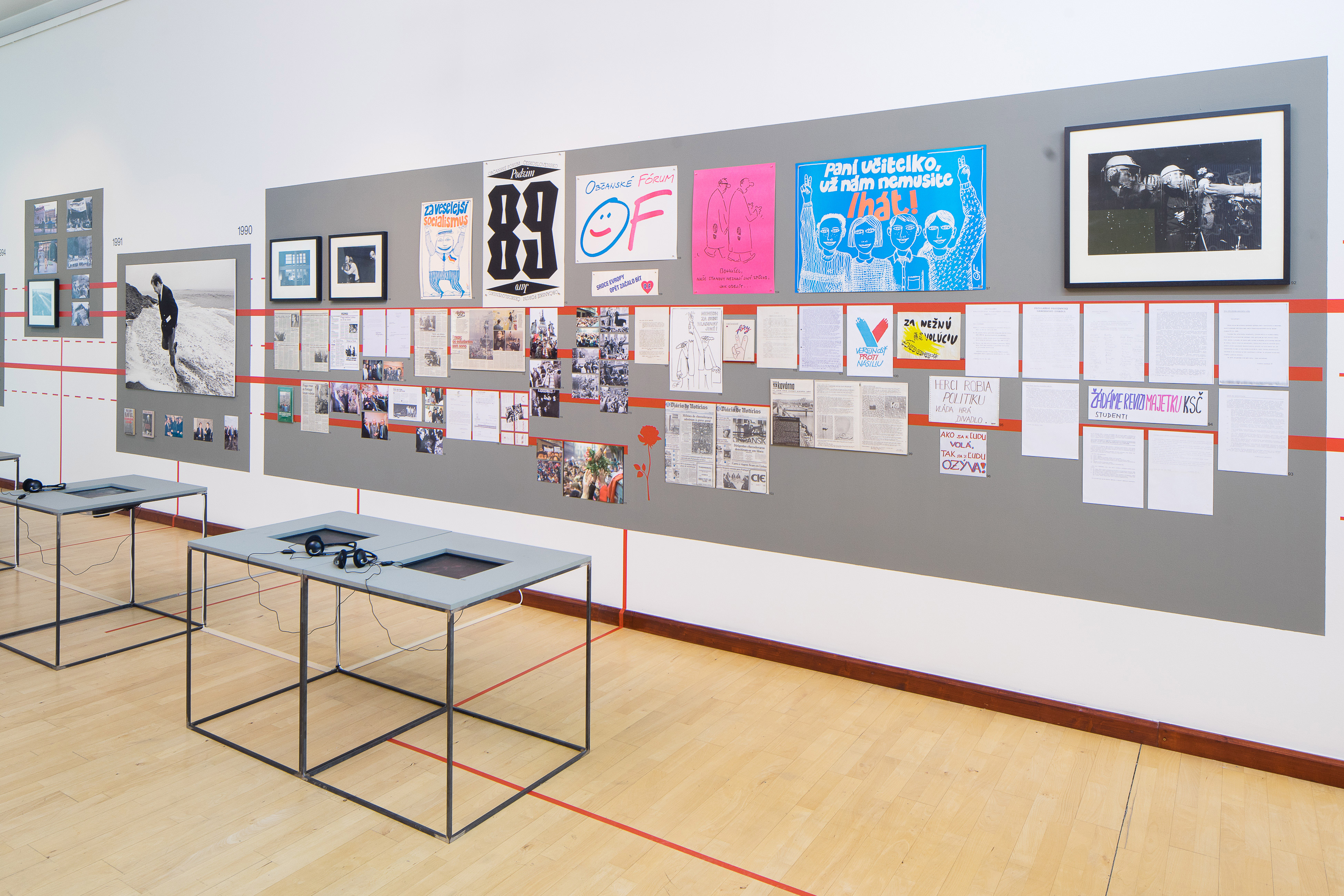 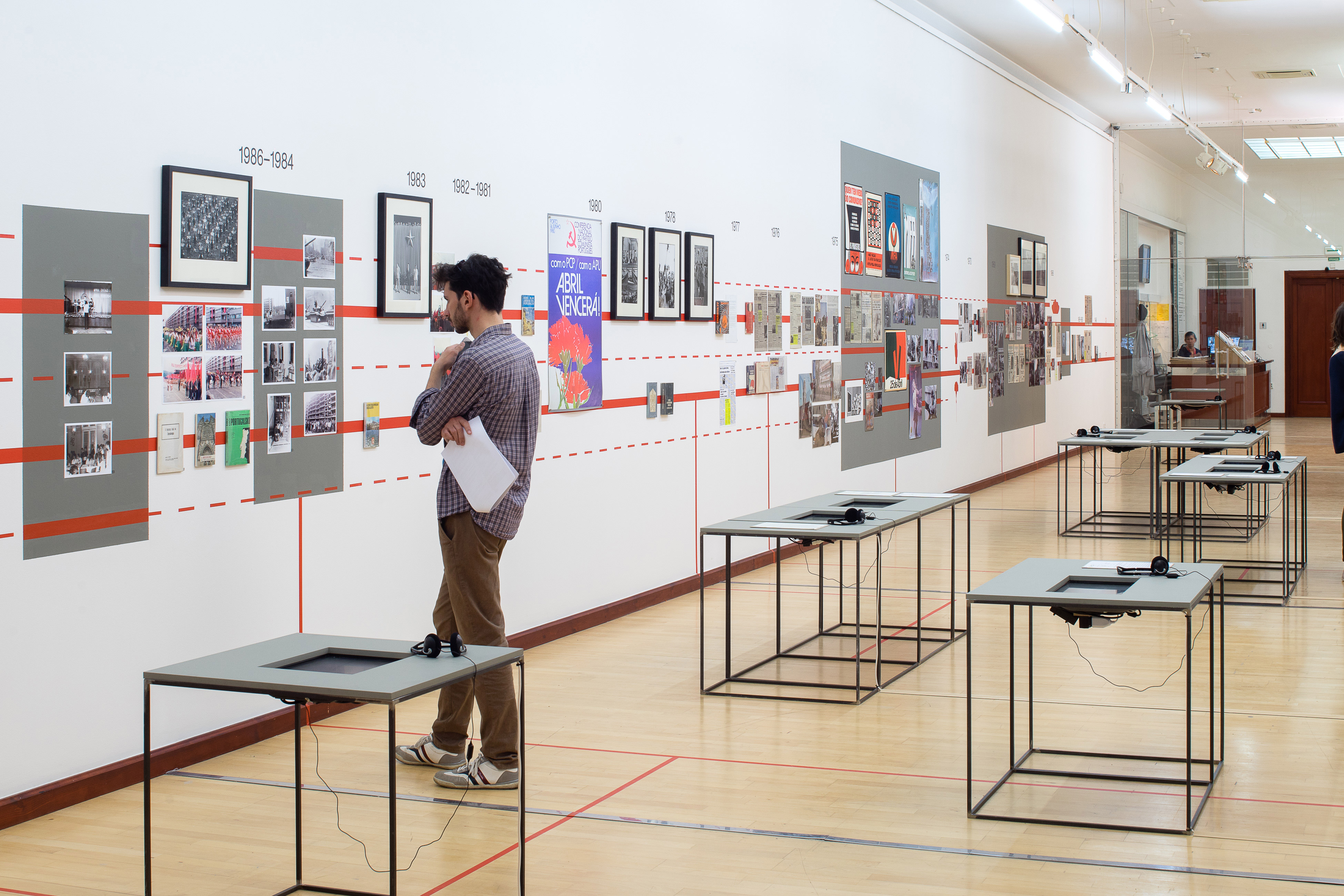 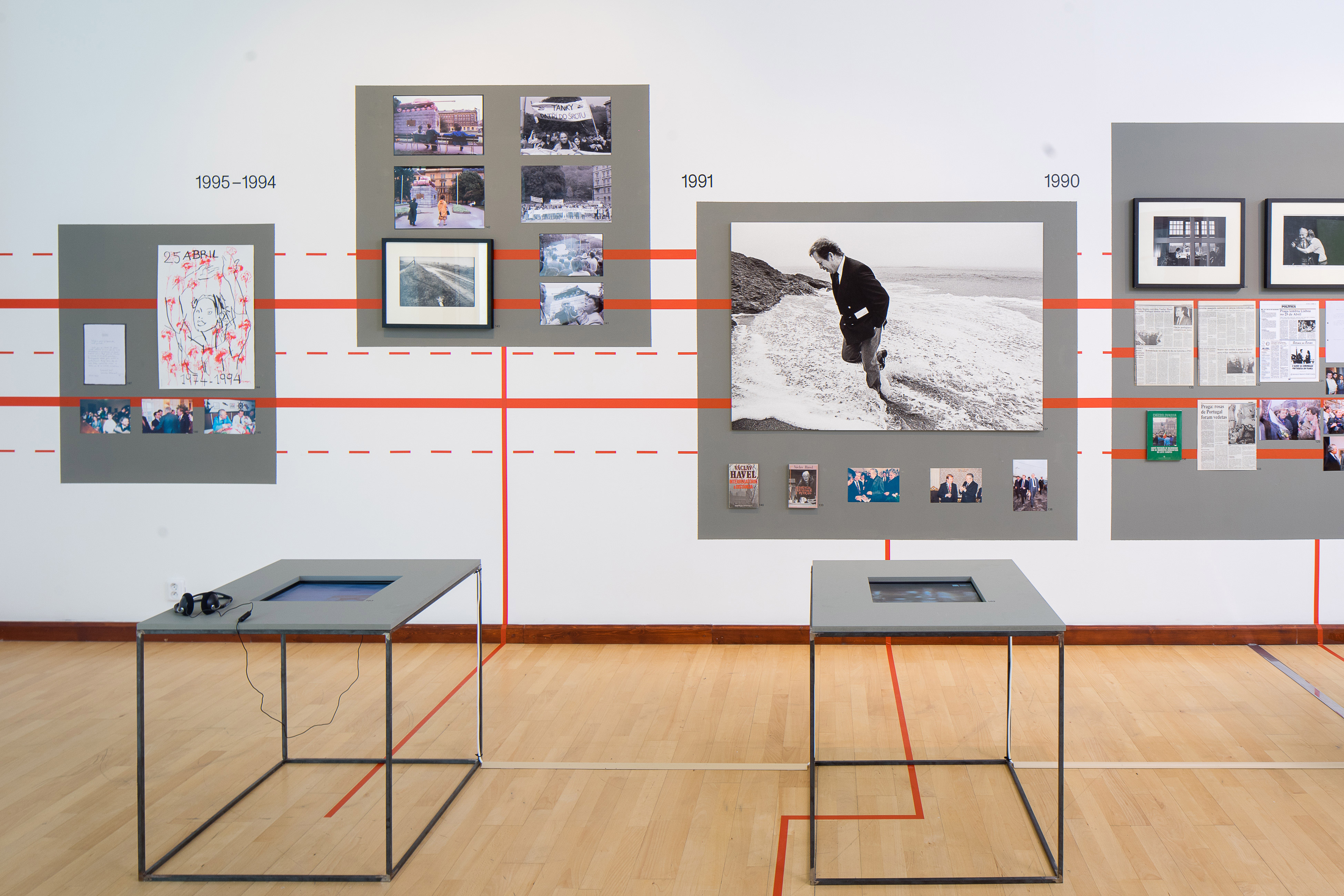 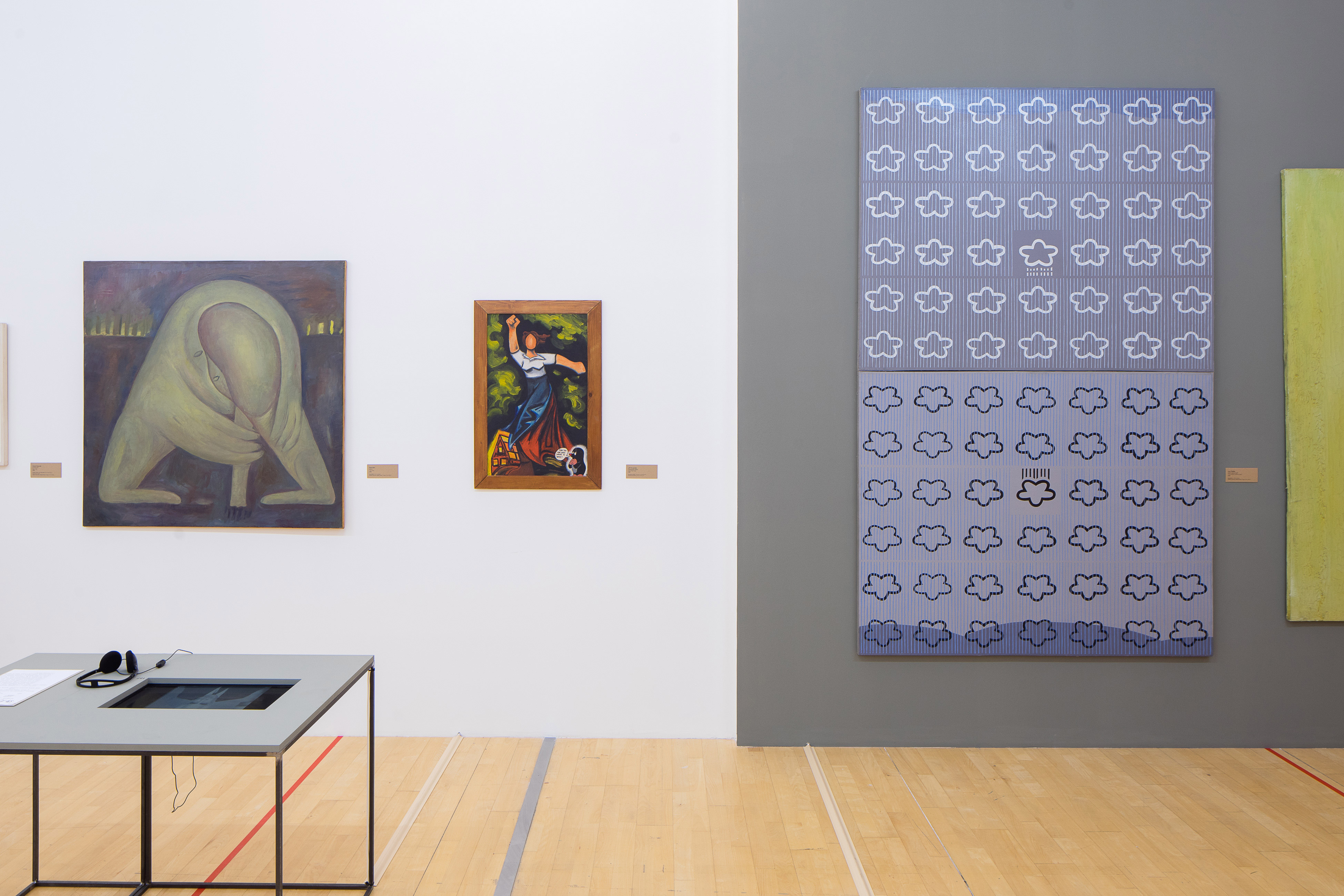 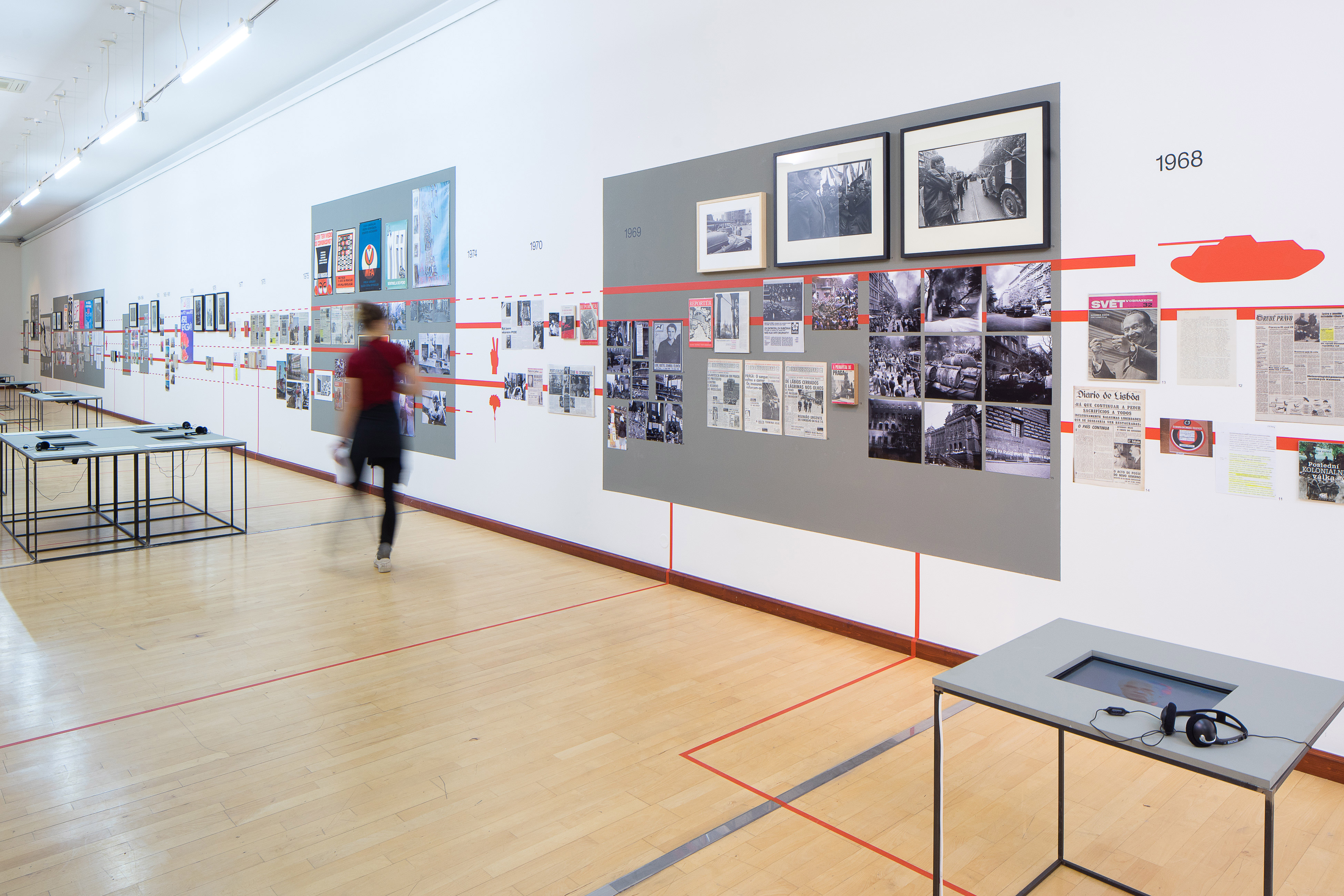